Unconditional Surrender, Next to Fall? 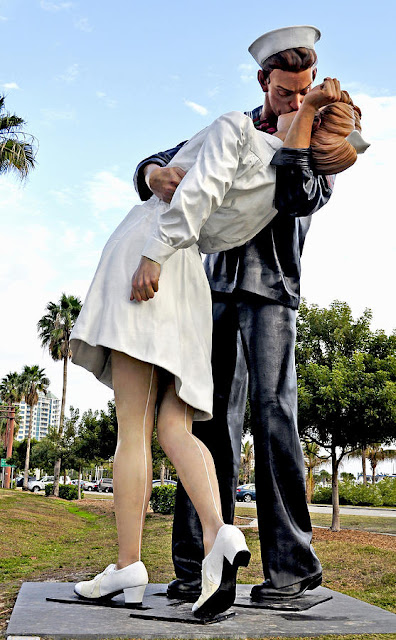 I live part-time in Sarasota and I have begun to fear that one of my favorite works of public art may be swept up in the new fad for the destruction of art, grammar, history and culture. Unconditional Surrender is 26 feet tall and it stands at an ocean front crossroads in beautiful Sarasota. It is an evocative sculpture based on a famous photograph taken on V-J day in Times Square. If you don’t know what V-J day is, you think any physical contact between a man and a woman must be ratified by permission releases and non-disclosure forms signed in triplicate or if you think V-J only happened because Harry Truman was an atomic war criminal (he certainly was not!), kindly click away from this blog and find a safe space.
I was curious that I had not heard of any petitions advocating that Unconditional Surrender join Robert E. Lee and Stonewall Jackson in the Statuary Hall of incorrect Art. A Google search quickly turned up a number of references to controversy. Most of them were mild and vague like the one titled

OK, that one wasn’t about the statue but about the original Alfred Eisenstadt Photograph but it proves my point even better that way. It is not political art. It is art. It captured a outburst of the human spirit that sprang from a moment fraught with relief and joy against a backdrop of the most disastrous, brutal and bloody war in human history (and brother is that saying something!). If you can’t value preserving that moment over your nauseating new rules for what is correct to think and do, then I understand why you cannot understand the value in the old, beautifully rendered statues of Lee, Jackson and others who were brilliant and steadfast in a horrible and (rightfully) lost cause and why they are still meaningful to their descendants and fellow southerners.
For God’s sake get over it!