OK, class, lets try out a new word, I have been working on a more accurate way of describing the polymorphous phenomenon we study at Second Draft and this one actually came to mind while I was responding to a very good post at one of my favorite Canadian Blogs, Blazing Catfur...

New Word:
Islamofauxia (pronounced like islamophobia with no "B") – The lies, staged video, PhotoShopped pictures, calumnies, rage triggers, exaggerations and assorted frauds that Islamists concoct and the eager propagation of same by the Mainstream Media.
If all cases of Media Fraud and Islamofauxia were this obvious, you would not need Second Draft...
Back in the summer of 2007 the picture on the right made its way into the media via Agence France Press news 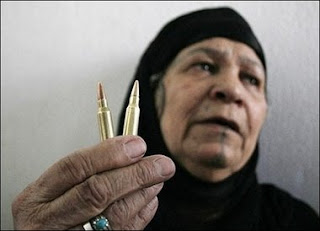 agency. It came with this rambling caption, which intentionally blends the mention of the supposed bullets of the coalition forces into inflammatory references to suicide bombs (which the coalition was actually working to prevent):
An elderly Iraqi woman shows two bullets which she says hit her house following an early coalition forces raid in the predominantly Shiite Baghdad suburb of Sadr City. At least 175 people were slaughtered on Tuesday and more than 200 wounded when four suicide truck bombs targeted people from an ancient religious sect in northern Iraq, officials said. (AFP/Wissam al-Okaili)
Any one who has ever fired any kind of firearm and most people who have even seen a picture of a gun being fired would, if they stopped to think about it, realize that since those two bullets were still in their casings, it is impossible that they could have “hit” that woman’s house unless someone took them out of a clip and threw them. The picture (taken by an Iraqi stringer) and the caption were concocted with the intent to deceive and mislead. Yonatan Zunger has some very interesting take on the background of the picture here.

The dizzying combination of evil but inept fraud of the Islamists and idiotic complicity by the media that produced this example of Islamofauxia is pretty rare. But one must wonder, “If this transparent incompetency could get as far as it did, what else are they doing that they get away with- and how much damage is it doing?”

Defining, understanding and counteracting Islamofauxia is what Second Draft is all about, In the next few posts I will be exploring the implications of this new word and how it shows that our way of investigating and understanding Islamofauxia has led us to an historic tipping point, that may turn out to have fateful and momentous implications for Western Civilization.

Update:
It can be varied for sub categories like Islamofauxist for the perpetrators and Islamofaux-assister for the media dupes
And Islamofauxney (Pronounced Islamo-phoney) as a general description of all ideas, stories and pictures that are manipulative, misogynist, intolerant, hateful, sly, destructive and lethal....

Updated Update:
This word is catching on because is close enough to Islamophobia so that it take some of the venom out of the accusation. Also, it is a good antidote to cultural relativism. If you call it Taqiya or Kitman liberals will say "oh, its a cultural thing, its ok." Giving it our own name says, "cultural thing it may be, but its not ok in this culture and last time I checked this is the successful one."
Thanks for supporting the concept!
Posted by Yaacov Ben Moshe at 11:58 PM

I like it! And the term fits so well for the Islamic propaganda war.

liftqydrI could recognize live ie unfired ammunition when I was 4 years old. I remember because I was scared of it. That photo reminds me of the aphorism that 'you can't cheat and honest man.' Not only does the media want to be cheated - even worse the audience does too. Not only have Muslim operatives found a ready market for Islamofauxia in the MSM, the MSM have similarly found a market among a public hungry for comforting illusions.

I have also been championing a related word: IslaMISTphobia.