Shelby Steele on The Exhaustion of the Liberals 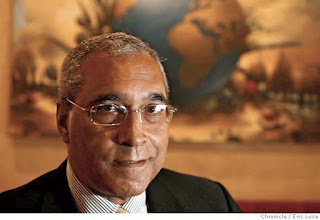 Shelby Steele’s wonderful article in the WSJ this past Monday is a masterwork. And yet I feel there is one thing I would presume to add to his insightful and honest analysis. That "shame of the past" needs to be looked at with that same honest insight. We all know that Mr Steele refers primarily to the two "grand sins" of American history, slavery and the taking of the continent from the indigenous peoples. Mr Steele seems content to let those pass into history as well they should. However, there needs to be a common understanding of them in order to keep those self styled "liberals" from wanting to replay them and spoil the future on their account. Those who have a compulsion to deny they are part of our shared history will always find a way to posture that feeling. In doing so they denigrate the rest of us.

Slavery was, indeed, an atrocity and should never be forgotten, although the bloodbath of The Civil War, the Emancipation Proclamation and the past century of (sometimes sincere, often courageous) civil rights activism should count for something. There is no way to repair such a horror but there has been a price paid. All the same, it is not possible to counter-balance the past horrors but it serves no useful purpose to only look backward and feel nothing but regret. By his example but not in any explicit way, Shelby Steele leads the way into a future in which we can acknowledge the sins of the past and still benefit from the great honor and advantage of citizenship in this great country.

The Indians are actually a different kind of question. As I have written in an older post,”

"When the white man came to “The New World” he was not, as some …would have it, invading a pair of continents that had been under the stewardship of a single people, living peacefully and in harmony with nature for thousands of years. He was stepping onto a perpetual battlefield where the inhabitants had arrived in successive waves of occupation, conquered and re-conquered each other, committed repeated savagery upon each other and had already permanently changed the character of the environment. Human sacrifice, slavery and constant low-intensity warfare (that often featured torture and rape) were universal across both North and South America before the Europeans arrived. The Europeans who trickled in for the first three hundred years and then poured in in immense numbers in the nineteenth and twentieth centuries came to escape religious persecution, political domination and limited economic prospects in their home countries. They came here and founded the greatest experiment in liberty, prosperity and self-government ever seen on earth. Without their descendants and The United States of America, the national socialist and communist monsters of the twentieth century could not have been defeated and would have dominated the earth. You can, as I do, feel compassion and even nostalgia for the American Indians but you can only lament their replacement as the dominant culture in the Americas if you believe that life on earth would be better had they not been conquered.”

Did I say “conquer”? Yes, I know that the word “conquer” is out of fashion these days. It makes most people very uncomfortable because it is redolent of violence, greed, slavery and colonialism. In this post-colonial age. The West has a very guilty conscience about all of that and its not that we don’t deserve it. Conquest is a messy and spontaneous process and it gets exceedingly ugly at times. Conquest by force is bloody, and even conquest by cultural conversion can look very harsh. The fact remains, to paraphrase D.H. Lawrence, when cultures that are as different (from each other) as Western Civilization and the American Indians meet, one must prove fatal to the other.”

Mr Steele has done us all a great service in his article by not just eschewing the shaming and moral posturing but also pointing out the damage that the liberal establishment dwelling on the guilt to excess has done. Rather, he strikes an optimistic, even heroic note and calls upon us all to recognize American Exceptionalism and its benefits. He also reminds us that, in the end the guilt and shaming has only been used to consolidate and manipulate political power and that minorities are much better served by allowing them achieve and strive without the enervating, will-sapping, family-destroying liberal creations of welfare, affirmative action and low expectations. As Steele puts it, liberalism has been,  “…about white esteem rather than minority accomplishment…,”.

No nation has ever been perfect but The United States was born reaching for perfection and has striven always, as it is written in the Preamble to the Constitution, for “ a more perfect union”. To keep striving, it is necessary to confront and understand that both of those “sins” are history and belong to history. The fact that America is the finest, fairest and most productive nation yet inhabited by humans on this planet must be kept in the present and future. Furthermore, unless the schools begin teaching history and civics free from the disingenuous harping on imperfection, the left will always be able to distract us all from the greatness of our nation and drag our young people out of their rightful future and into the darkness of the past.

Stuart Schneiderin has a good article on the Shelby Steele article