The Hidden Radical Shows Himself 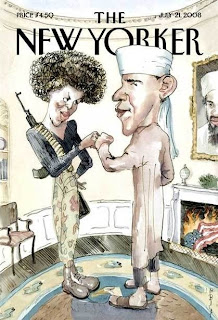 Last night, Obama tried to distance himself from the haughtily idealistic and much too trusting of others guy who once said that upon being elected, he would run right out and sit right on down face to face with any tin-pot dictator or genocidal mass murderer who would care to use him for the propaganda value of the meeting without preconditions. He did a lot of word games and qualifying (preparation as opposed to preconditions etc…) but it only reminded me of the ultimate language parser Bill Clinton who once retreated behind the smoke screen of “what the meaning of “is” is”.

Judith Apter Klinghoffer has a nice article about her initial reaction to Obama’s personal style in this debate. Her observations are very astute especially, I think, the fact that he cannot seem to find the moral fiber to admit a mistake. I would amplify that observation a little. A debate like this is something like a boxing match. You try to land clean punches on your opponent and parry his blows. It is a sign of tactical and personal weakness if you cannot move on after your opponent stings you. Admitting a mistake is one thing. Obama is obviously not secure enough to do that and it is, arguably, a mistake in the debate format. The unforgivable debating mistake is to try to convince yourself and everyone else that the punch did not land by continuing to parry it over and over again. Your supporters will take your first explanation and everyone else will see that you are hurt and flailing take the advice of the lunatic fringe group that you said the stupid thing for in the first place and Move On- it happened, get over it and keep punching.

And that points up another problem for Obama. That remark got him a lot of points over Hillary when he said it. It ingratiated him with the “War is Not the Answer” types. In return they helped him get the nomination over the more realistic talking Hillary. Last night, he did a lot of tough talking- he even darkly implied that he wanted to kick Osama’s butt so badly that he would invade Pakistan to do it.

So who is he? What does he want us to believe so that he can be elected and what will he really do when he is? In her article Klinghoffer admits freely that she wrote nothing about the substance of Obama’s performance and neither will I- because there wasn’t any that you could depend on. He leaves us trying to read the vapors of his style.

To me the single most interesting statement to come out of last night’s debate, and it was easy to overlook it because it was a little subtle, showed us a titillating glimpse of the true-believing, Progressive, pink underwear that he still has under his new Alpha Male suit. It shows that he is still the elitist, socialist Alinskyite organizer for which the far left forsook Hillary. It was really just a passing turn of phrase, but I think it a very telling one. You may recall, he referred to Putin as a real “twentieth century” tyrant (or was it dictator?). He went on to say something (if any one knows where I can find a transcript of these exact words, I would be very grateful!) about how he had to be made to become a twenty-first century leader.

Aside from the ridiculous image that it brings to mind of Obama calling up Putin on the red telephone and saying, “Whoa, Dude, hold the invasion up! That was, like, sooo last century!” - it was also a great throbbing tip-off that betrayed the intentional ignorance of human nature that is so characteristic of the socialist left.

It shows that he somehow believes that there is some magical process by which “the modern world” of the twenty-first century will somehow change and evolve human nature away from susceptibility to dictatorship, totalitarianism and conquest is a dead give away that he is one of those people who has little regard or respect for the achievement of the American system of government which by acknowledging human nature and building a system of checks and balances to channel the energy and grandeur of the human spirit while protecting against the venal aspects of it.

Obama’s faith in the new century is not naïveté it is something much worse than that. The naïve are educable. In the early years of the twentieth century it was, perhaps forgivable to have that kind of delusional faith in the possibilities of the new century, modernity and the paradise of the workers. People who can still believe in socialism and the possibilities of yet another century have simply refused to see and understand what it led too in Nazi Germany, Russia, China and every failed commune community that has ever tried to implement it.

Sadly, it is not Putin whose behavior and thinking is somehow so out of vogue and déclassé that that he will fail. No Mr. Putin is all too wired-in, capable and on top of his game. It is Barak Hussein Obama who, even though he is twisting every which way but straight, is out of touch, tone-deaf, shopworn and (I hope) just transparent enough for the sharp-eyed American people to see through him.
Posted by Yaacov Ben Moshe at 7:16 AM

"Aside from the ridiculous image that it brings to mind of Obama calling up Putin on the red telephone and saying, 'Whoa, Dude, hold the invasion up! That was, like, sooo last century!' - it was also a great throbbing tip-off that betrayed the intentional ignorance of human nature that is so characteristic of the socialist left."

Well said. The road to Hell is paved with intentional ignorance of human nature.

Here's that transcript, and here's the quotation:

"It is absolutely important that we have a unified alliance and that we explain to the Russians that you cannot be a 21st-century superpower, or power, and act like a 20th-century dictatorship."

Dictators are all the same no matter the century.

He leaves us trying to read the vapors of his style.
That reminds me of something I was told many years ago when Gone Whith the Wind first aired on tv - "A Southern lady has the vapors, the restof us just fart."

Obama has contiually reminded me of that childhood learning moment.

“So who is he? What does he want us to believe so that he can be elected and what will he really do when he is?”

Don’t you recognize the standard tactics of a Marxist? Get power however you can and do whatever it takes to keep it. The end (a Marxist utopia) justifies the means. I don’t think this guy is some new progressive, socialist, or whatever. He is a classic Marxist trying to hide the fact long enough to get elected. Now if elected I don’t believe he can move us into a totalitarian socialist state because he will get impatient and move too fast but he can certainly do a lot of damage trying. Don’t you remember his ideas about funding some sort of community organization initiative as heavily as the military? He knows the military will not support him if he tries for example to circumvent the constitution in obvious and crass ways. But the old “living” document ploy won’t be flexible enough for a Marxist utopia. That reminds me that one of Obama’s big supporters is George Soros who I believe is in favor of completely rewriting the U. S. Constitution.

Anyway as president might Obama try to do something like heavily under fund the military as he increases funds to his community organizations and then perhaps give them some policing powers? No he wouldn’t do that would he? If this guy gets elected we may just learn the meaning of “May you live in interesting times.”

The best way to learn about a candidate is to look at their associations before they started campaigning.
See this link:
http://www.barackbook.com/Profiles/AliAbunimah.htm
and this video from Democracy Now:
http://www.youtube.com/watch?v=AmFBDPFWKBU