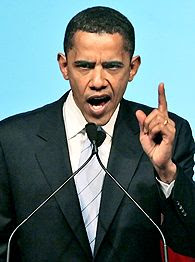 He was nominated for the prize less than two weeks after his inauguration. You simply can't tell me that it was anything other than his race that was behind that. Now after only 9 months in office , without any actual results, how could he deserve so much as a Kewpie Doll at the state fair?

The Senator who voted present (although infrequently) is now the peacemaker who has not made anything. Why don't they wait a year or two to see if anything works out? Maybe they don't any faith in him either...

It is true that alienating your allies and laying down your defenses to your enemies will lead surely to peace, but I fear it is likely to be the kind of peace the peoples of the Soviet Union had for all those blissful Communist years- or even worse a millennium or two of Pax Islamica under the promised Caliphate.