The Destruction of the Individual 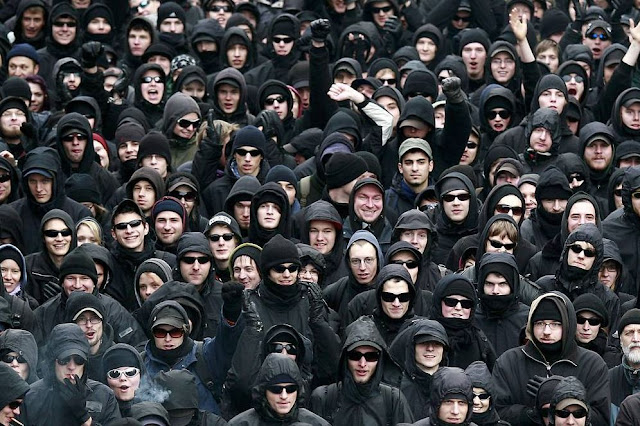 The American Left makes a show of disapproving any but the most denatured, toothless and universalist religious beliefs. They are suffused with a sexual ethos that is amoral and libertine by the standards of the recent past. Their intellectual post-modernism specifically prevents any moral judgement or ethical framework. In fact they pride themselves on the ability to“deconstruct” the traditions and values that under-pin our civilization. Yet, they seem able to put aside their fractious identity politics in order to be unaccountably tolerant- even supportive of Radical Islam That political religion commits terror against the rest of the world and has spawned despotisms of religious elites of some degree in the entire Muslim world. They also demand the killing of apostates, the torture and murder of homosexuals, the subjugation, rape and “honor” murder of women and children: This begs for explanation.

I have a simple answer, and I want to hold it up for my liberal friends so that they will see themselves in it and think again about their current leftist doctrine.

Some have said that the affinity between the Left and Islam has to do with the historic crimes of the West and the Judeo-Christian culture. In doing so, they willingly ignore the murder and terror that accompanied the Islamic conquest of Arabia, The Levant, North Africa, large swaths of Western Asia and even parts of Europe in the heyday of the Caliphate. Although there may be some element of truth to the accusations of Western crimes, it does not compare in scale, ferocity or longevity to the crimes of Islam. In any case, the affinity is deeper and more central to the Left and Islam than that.

It is about human nature, and the urge to change and control it. Islam, you see, is about surrendering the individual will to Allah, and although Progressivism purports to be about compassion and “humanity”,it shares with Islam a kind of surrender of the individual. The Left and Islam are united in their animus toward individualism, family loyalty, nationhood, liberty and and an open and questioning religious faith. At the very bottom of the issue, Islamic Jihad and the progressive Left have this in common: as Dostoevsky put it in The Brothers Karamazov, “…the more I hate men individually the more I love humanity.”

That’s a harsh thing to say, so for clarity’s sake let me stipulate that I do not mean they are incapable of loving individual people. There is a difference between what we call “the individual” and a particular person. You may love one or many people but if you cannot love, or at least accept as human, someone who does not behave as you think fit or subscribe to the same political doctrine that you do, then you are denying and hating “the individual”.

The name “Progressivism” itself implies that there is a ‘humanistic’ ideal that can be reached in an orderly, planned and (if necessary, enforced) progression. This is nothing more than the same intellectual fantasy that has given birth to all of the utopian movements in history. Utopias always seem so promising at their invention, but they lead only to dystopia and suffering. The annals of socialism, communalism and communism are replete with failure and horror.

At their worst, they have led to mass killings in Ukraine, Russia, Nazi Germany, China, Cambodia, and Venezuela (to mention just a few) and at their best they offer a kind of tepid, quasi-democratic environment where individual advancement is all but impossible for any but the members of the elite. Even the best, Post War Germany, Sweden and Denmark, for example, are fast succumbing to the fecklessness of their fuzzy progressive ideals and the incompetence or their effete leadership. In the face of (irony of ironies!) Muslim immigrant hordes that serve as a Trojan Horse for Jihadists and the terror they bring the socialist democracies of Europe are dying before our eyes.

All they offer us as a rational for their failure is hatred dressed up as love and tolerance. Only consider what passes for political polemic from the Left. The “Nazi” meme, thinly veiled character assassination and other unproven ad hominem attacks prevail. In the liberal media Donald Trump is constantly characterized as a heartless, vicious, greedy fascist, and even insane. Anyone who supports him (or even refuses to denounce him!) can count on being vilified and dismissed.

Disagree with his policies and personal conduct if you want, but this is all out of proportion and a shameful proof that the Left is without any means of logical or reasonable argument for what they believe. Its not just Trump either. There is not a single conservative that is immune. They have even condescended to despise Ronald Reagan- arguably the last successful U. S president. The best they could do against Reagan, though, was to call him an “amiable dunce” or a tool of the corporations, even though his policies lifted the nation out of the self described “malaise” of the Carter administration into the headiest era of prosperity and universal well-being we have known since. But that is really just further proof that they hated him- not just for being different from them but also for proving that Jimmy Carter, one of their own, was hateful and incompetent. Whatever small respect they had for Reagan and the office, if they could only muster something like it for Trump, we might again experience a new “Morning in America” era.

Unfortunately, that does not appear to be what they want. They sooth their discontent by assassinating the character of individuals who stand for The Individual.  Their so-called humanism seems to be more of a means toward other ends…which begs the question… What is this “progress” the Progressives have in mind for us? In my next article I will address where “progress” of their kind leads.