Who is the Ruling Class?

They Exposed Themselves Last Night 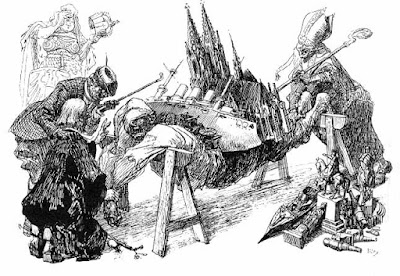 Let me start by saying that I have a deep reverence for John McCain as an American hero of the last century. In his currently stricken state, it might seem that he is a poor choice of starting point for this particular argument. I would argue that exactly the opposite is true. For more on the other side of Senator McCain, here is a good primer.

Last night he and two other Republicans drove a stake through the heart of the attempt to stop the nationalization of health care. He left the care of his own doctors and flew to Washington for that express purpose. This is the very pinnacle of ruling class hubris. Whilst engaged in a battle for his own life and taking advantage of a level health care that most Americans can only dream of, he flew across the continent to cast a vote against the tide of failed government interference in the market for medical care that has succeeded only in breaking the system to the point that we are on the brink of an irresistible movement to take freedom out of health care altogether and institute “single payer” government control. Leaving aside the illogic of increasing the control of the government in order to “fix” what the government broke in the first place, I want to focus on the people whose ”leadership” keep us digging while it becomes more and more improbable that we could ever climb out of this hole into which we have all, leaders and constituents, dug ourselves.

The most privileged people in our country are arrogant and self-important. But they are still dependent on the votes and confidence of the public. To convince the voting public, themselves and each other that they are magnanimous and trustworthy, they make public shows of “compassion”. They crusade to expand insurance coverage for “the uninsured”. They open our borders without discrimination both to those who will enrich our culture and those who will impoverish it. They grant subsidies for all manner of anti-social and counter-productive behavior: low interest financing and tax benefits for useless degrees at schools that offer not much more than “party campuses” and breeding grounds for political unrest, welfare benefits that encourage families without fathers and multi-generational dependance the list is endless. The bottom line is that The United States of America is turning into a modernized reproduction of the Ancient Regimes of pre World War I.

Instead of “The Church”, The Royal Families and the Landed Aristocrats, we now have Politicians, Academics, Journalists and Money Manipulators as our “betters” but the result is very similar. If I had the artistic talent, I would do an updated version of the Heinrich Kley drawing above showing the new worthies loading up the backs of our working people and entrepreneurs with illegal immigrants, affirmative action, alternative energy, relaxed mortgage requirements for people designed to encourage minority home ownership, single payer health care and all the other vanity projects of our ruling class.

John McCain is sick and he is fighting, once again, for his life but let’s get this straight because it is life and death for the rest of us. He had the opportunity to get treatment and his operation at the VA. He is entitled and deserving of that for his service. As a grateful nation, we should ensure that the VA gives the best care possible to our veterans. He, however, chose not to get that treatment but to go to The Mayo Clinic. I cannot fault that decision personally but politically, it is very telling. More and more our “public servants” send their children to private schools, use government paid transportation, live behind security walls with armed guards, ignore laws and ethical practices the rest of us are held to, avoid taxes with impunity, amass private wealth at the public trough and, in general, live lives that are entirely unlike ours. They keep pushing the idea that they are compassionate, not by living compassionate lives or even by helping the poor achieve better lives, but by posing as compassionate people. It is an illusion! The programs they create do nothing but continually decrease the difference between those who work and those who don’t work. They take our tax money and create federal fiefdoms (EPA, HUD, BLM, Education, etc…,) that create and exacerbate more problems than they solve.

Most corrosive of all, they tell the undocumented aliens and the entrenched poor they have taken into their plantation that they are their benefactors. then the go home, with a wink to their fellow elitists, to their gated communities. This is where we are headed as a nation unless we can get the right leadership in place. We now have a president who gets it but the McCain, Collins, Alexander, Moore-Capito, Heller, Murkowski, and Portman votes of last evening just added more burden for us all, This virtue posing and false compassion is killing us. We need it to stop.