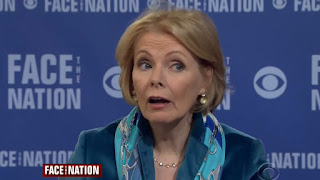 It was a mystery. Now I think I know what strange aberration of thought had its hold of her when Peggy Noonan supported the candidacy (at least in 2008) of our most disastrous president in history. Peggy Noonan is a Progressive. This past Saturday’s column in the WSJ was a tragically ironic lament against both Clinton and Trump because they won’t publicly say they “hate” war. Her “reasoning" unintentionally exposes her sympathy for the progressive lunacy behind the Obama administration’s foreign policy. That very policy which has encouraged the horrors that are rising in the east and threaten to engulf the entire world.

Ms Noonan, usually a most subtle thinker and artful writer, misses entirely the irony of her praise for Roosevelt’s 1936 speech at Chataqua which was the very avatar of the self-satisfied progressive appeasement that led to World War II  and her echoing the feckless foreign policy of the Obama administration - including Secretary of State Clinton. It sounds familiar -all too familiar to me- Ms Noonan quotes Roosevelt in 1936 as...
“serving the cause of peace by “setting an example” and following the policy of the good neighbor—“the neighbor who resolutely respects himself and, because he does so, respects the rights of others.” ... “the whole world now knows that the United States cherishes no predatory ambitions. We are strong; but less powerful nations know that they need not fear our strength.”

All the while, Hitler was building his Nazi nightmare, Roosevelt was proving his peaceableness by not standing up for the Czechs, the Austrians or the Jews.

Japan raped China. Gosh that was harsh- but didn’t it just go to prove that war is hell?
Oh, what a good neighbor! How sweet that Roosevelt hated war so much!

He also proved that we had no "predatory ambitions" while Hitler overran Europe. I guess he was sort of  "leading from behind"- so full of "self respect" was he that even as the blood of Polish officers’ and Jewish innocents flowed, he despised war.

Then on Sunday Dec 7th 1941 Japan, so convinced they must have been that they need not fear our strength,  smashed The Pacific (how aptly named) Fleet and that century’s "soft power” charade was exposed. At least it was discredited for THAT generation. A Nipponized bit of the old Sixth Avenue el in Cummings’ words did it.

What will it take for our generation? Certainly not pictures of little traumatized Arab kids- not if all you want to get out of them is “I hate war”. 9/11 couldn’t do it because nowadays we couldn’t call it an Islamisized jetliner mass murder. Beheadings, stabbings and shootings won’t get it done if you insist that they are incidents of work place violence, and man caused disasters. Are the endless barbaric videos of beheadings and immolations just so much war to hate? Or are they a call to action?

If other nations do not fear us we must end up fearing them. That is how it works. Not just in past centuries but in this one and into the future. We cannot choose never to see a child harmed, our choice is limited to making sure that it is not our children. Never our children. 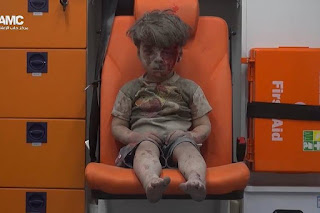 Posted by Yaacov Ben Moshe at 8:58 PM No comments:

Arab on Arab Violence- We have Pictures

I have posted many times about “Pallywood”and its cousins throughout the Islamic world. From al Durah touching off the second intifada forward, attempts to delegitimize Israel have been swallowed whole by the gullible and self-destructive western media.

Lately, there has been quite a lot of this kind of foolishness coming out of Syria. Even though I don’t really see myself having a dog in that fight, not long ago, I posted about this picture that appeared in the Wall Street Journal: 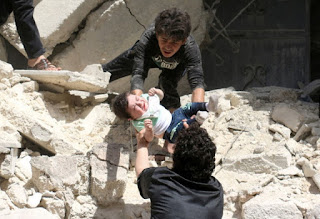 While it seemed obvious to me that this was another of the crass, cynical and pathetically inept faux news photos that are launched almost as often as Katyusha rockets in that neighborhood, I was surprised that the WSJ fell for it and that there was some discussion on my blog post and elsewhere  by people who thought it might be genuine. Rather than get into a long discussion again about how spiffy clean the kid is and how utterly destroyed the building.
Lets just look at what a (probably) genuine example looks like: 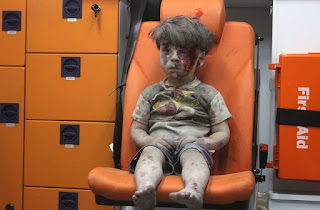 Posted by Yaacov Ben Moshe at 10:58 PM No comments:

Email ThisBlogThis!Share to TwitterShare to FacebookShare to Pinterest
Labels: Pallywood 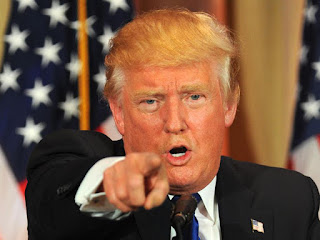 Political correctness exits sole as a way of stifling  ideas, speech and behavior that make some people uncomfortable. Truth is often the most uncomfortable thing and, while discomfort is not always proof of truth, it is a close enough indicator to merit investigation. This is why political correctness is so corrosive. It shuts down thought and discussion in order only to soothe feelings. In the process, it prevents a closer relationship with truth.

When people and their ideas need to be silenced to preserve PC, those people must be disqualified  and, if possible, destroyed without respect (or even reference) to their ideas. One way of blotting out people and their messages is to disqualify them- to define them in such a way that it justifies you and others like you in believing that “those people” could not possibly have anything of value to say. That they are somehow both wrong and incapable of improvement.

This, I believe is the reason for the current change in memes that are applied to the supporters of Donald Trump. Keeping in mind that the statistics do not entirely support the characterization, let’s look at what is being said about them in the media. Working Class used to be the term applied. It is a superficially respectful term. There used to be a respect for useful work diligently done even if elite classes expressed such feelings in a patronizing way.

How many politicians take pains to tell personal stories, no matter how false or twisted, about their origins in a “working class” family. These stories, however, always end in ascension to the elite class of politicians. The pretention and pride

If “working class” sounds too dignified and authentic to you and you need to completely negate what you do not want to hear or even acknowledge the existence of, then you need something stronger. The most popular and dishonorable example of this is “Non-College Educated”. It is a designer meme- so effective at damning the opposition and making real debate and, even the facts of the matter, inoperative. Who needs reason and facts when you can just ignore them because they are “uneducated”?

Of course, any such means to dodge real confrontation with facts and debate only works if your need is particularly desperate- and Donald Trump makes them desperate.

The truth is, the Non-College Educated (let’s just call them the “NCE” from now on) are not stupid. They are not ineducable and they are not wrong about much in their own lives. They can’t afford to be. They are the hardest working and, in many ways the most accomplished people we have. They have closer families, are more religious and feel more patriotic than the average American. Because they tend not to make their livings at occupations that do not amass great wealth, they are probably better at managing money and time than most. All of these traits speak to practicality and intelligence and they are all things that the jaded elites, who would like to rule them without question, look down upon. You are constantly being “defined out” of the universe of what and who is acceptable.

If you can see that open border immigration is a danger at worst and a dilution of our culture at best, the President tells you you are not acceptable by sniffing, “That is not who we are”. If you can see that the vast majority of terrorism is done by Islamic groups, The president asserts that it “is not true Islam”, decreeing your observation be not acceptable. If the FBI director makes a long speech detailing the malfeasance and disregard for the rules of security of the former Secretary of State and the media helps her to frame it as “exoneration” your sense of outrage, morality and violated fairness is rendered unacceptable.

I am college educated. In fact, I have a master’s degree. But I know they mean to demean me because I am also a Trump Supporter. I do not care that he speaks his mind and sometimes overstates things. At least he is sincere and honest. I would sooner trust a seasoned businessman with an independent fortune who says what he thinks.  I certainly prefer him to a proven liar who has become rich by selling her influence to anyone with the pony-up. If you have an inkling that speaking fees in the mid-6 figure range for the husband of the Secretary of State that coincide with official actions by The State Department in favor of the entities who paid those fees constitute a selling-out of our nation in a very public and dishonorable way you would too- Unless you are way too elite for folks like us.