Renewing the Faith of the Founders 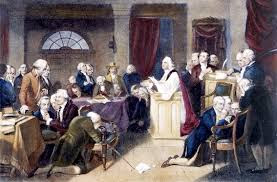 Clarence Thomas, in a rare interview, asked the question “What binds us as a nation?” It is the perfect question of our time. We seem to be increasingly hard pressed to find enough in common to call it a national purpose; I don’t like the word identity anymore for the connection it makes to identity politics.

In my last article, I began to make the case that at the inception of our national movement we predicated our understanding of our “rights” as something with which- in Jefferson’s formulation- we were “endowed by our Creator“: only God can save us.  I ended with a paragraph that I called “my best shot at a sales pitch for a revival of faith”. I have made two key refinements to that paragraph and now it reads this way:

“Here is my best shot at a sales pitch for a revival of a nonsectarian “public” faith: Religious exclusivists*, agnostics and atheists are at a far higher risk of being a “glass is half empty” person. Having a belief in a loving Creator/God gives you a much better chance to be a “glass is half full kind of person”. Having a personal relationship with that loving and transcendent God is the portal to becoming a “cup runneth over” being.”

Of course, I am aware that this seems a very old fashioned, maybe even an anodyne statement, but allow me to explain why it is actually a very challenging and “anti-postmodern” idea.

Post modernism, and by that, I mean the fashionable progressive notion that there is no truth- only alternative narratives- that the quest for truth is a futility. This leads to a susceptibility to the emotional attractions of socialism and the idea that human nature can be changed. Its been tried many times and the outcome is always bad and usually a horror. Fitting actual people to a progressive socialist system has never been done without some form of bullying, repression, “political orientation”, “re-education” and terror. Progressivism is the modern utopian delusion, the poisonous fruit of the postmodern tree.

The most poignant thing about postmodernism is its very human attempt to understand and, in a way, control the pain that ambiguity causes in all people. Take for instance the gender fluidity craze that is sucking so much of the oxygen out of the halls of academia recently. When adolescent humans who have not solidified their social, intellectual and sexual identities are allowed, even encouraged, to pretend that they know who they are and what they want, free (or, rather, bereft) of moral guidance or ethical compass, they do not choose with freedom, and they act out their stress. Gender fluidity and the welter of nonsensical pronouns and ground rules are nothing more than attempts to adapt to and control the anxiety over a natural source of ambiguity by exaggerating that ambiguity all out of proportion with reality - making it a political cause rather than a personal issue.

Post modernism is a betrayal of our truest selves. Rabbi Lord Jonathan Sacks has written. “We should challenge the relativism that tells us there is no right or wrong, when every instinct of our mind knows it is not so and is a mere excuse to allow us to indulge in what we believe we can get away with. A world without values quickly becomes a world without value.” Rabbi Sacks, a great intellect and an even greater soul, has put his finger directly on the turning point of our age.

Implied in Rabbi Sack’s statement above is that there is a source of truth and value. From the earliest days of the last century, the time when postmodernism was gathering a following in the intellectual cafes and salons, comes this epigram (erroneously) attributed to G.K. Chesterton: “When a man stops believing in God he doesn’t then believe in nothing, he believes anything.” Anything, can be, for just a few examples, that your biology does not determine your sex; that you can call yourself anti-fascist while employing all the street tactics of fascist thugs; that your beliefs and feelings are “science-based” while you don’t actually know how the things you believe in work; and that you are an intellectual while you ignore, denounce and shut-down anyone you disagree with. Does believing in God correct the susceptibility to error?

It can. God and creation are beyond our understanding. It is arrogant and self-important to think that we could understand the universe and life completely enough to avoid the stress and cognitive dissonance of knowing certain things that are true and constantly observing other things that feel like contradictions but are also true. The “Progressive” postmodern solution is not to believe in a divine creation and to shun and ridicule the belief in order and truth. Only if you believe in God does it become clear that our poor human instruments can only understand so much, and that if you have the idea in your mind that there is a creator, a purpose and a “whole truth” out there, you can stop trying to explain everything and let “God take care” of the ambiguity you perceive. This is a source of inner peace and strength and it keeps us from struggling against reality.

But, we are humans and limited in capacity to understand God so there are almost as many ideas about God as there are people. We certainly do not all believe in the same God. In one way, it seems as though it should be an easy thing. After all, a cynic would surely ask, “If it is true that there is only one God, doesn’t that mean that everyone who believes in God must be thinking of the only one?”. So, how is it that the seemingly simple task of making sure that everyone believes in the same God is the dream behind every tyrant, every torturer and every conqueror that has ever lived? They all wanted so desperately for every person under their rule to be under their control - all the way down to the way they think and dream about God. That is the genius of the founding fathers of the U.S.A.! America is exceptional from its birth precisely because it is the first country to be founded on the idea that those inalienable human rights are granted to us by God and not subject to rescission by anyone.

For those who believe in God as the creator, our moral calling and ethical responsibilities spring from our belief that we are “created in the image of God.” For Jefferson et al, liberty comes from the same source and thus cannot be taken away by any king or ruler.

We are blessed to be the inheritors of a great constitution and an even greater Declaration of Independence. On one hand, The Constitution never mentions God at all and is clear about the separation of church and state- specifying freedom OF religion (not, as it is often misinterpreted, freedom FROM religion). On the other hand, The Declaration is equally clear about a very particular kind of deity as the basis of all the policy that is set forth in the Constitution and the laws. Anthony J. Minna has given us a wonderful description of how that deity is framed”

“The genius of the Declaration is the inclusive way the divine is given expression. The appellations of God are generic. Adherents of traditional theistic sects can read the words “Nature’s God,” “Creator,” and “Supreme Judge,” and understand them to mean the god they worship. The claims made on numerous Christian websites attest to this. Yet opponents of dogma read those same words and see an embracive, non-sectarian concept of divinity. This is no small testimony to the wisdom and foresight of the Founding Fathers. All Americans could support the Revolution and independence. All can regard their rights as unalienable, their liberty as inviolable.”(link)

This was how the compass bearing was set on the ship of the newly founded state. The country that has navigated by that bearing has become the most prosperous and most egalitarian in history. There have been boom and bust cycles and there have been moral failings, but the preponderance of the record leaves this verdict without dispute: America still is, “the last best hope of earth.” Every citizen can be a stakeholder in this country but we need to protect our values and the best way to do that is to find our way back to that divine compromise set forth in The Declaration.

What it boils down to, in my view, is that it makes you a better, freer and happier person if you believe in (and worship) God in your own way. It makes a nation better and happier if all have agreed to seek a true understanding of and trust in God and to share what is knowable, while keeping a deep reverence for what is un-shared and unknowable.

Posted by Yaacov Ben Moshe at 8:59 PM No comments: