If I didn’t believe that I was doing something important, you could not pay me enough to read and think about treacle like this. No wonder papers like The Globe and The Times are shedding readers faster than Jake, my Labrador, is shedding fur.

The Boston Globe web site has a Reuters article that appeared in the Boston Globe newspaper a few days ago entitled Rice seeks Mideast peace deal while Bush in Office under the byline of one Sue Pleming.

In many ways the article is standard Reuters fare which is to say that Ms Pleming seems to go to great lengths to give the appearance that she is providing real information while she is actually carefully observing the Political Correctness Protocol by not saying anything about one side of the conflict that she would not say against the other. Since the Palestinian side wants to destroy Israel and is in the throes of a violent civil war and the Israelis only want to be allowed to live in peace, it makes for some foggy prose and some even more opaque logic. Just look at this couplet of sentence/paragraphs in which the concerns and positions of the Israelis are compared and presented as equivalent to those of the Palestinians. This is a gem of moral relativity.

“In an indication of difficulties ahead, Israel has also put the Palestinians on notice it would not implement an agreement until its security concerns, spelled out in a U.S.-backed peace "road map" formulated in 2003, were met.

The Palestinians have called on Israel to meet its commitments under that blueprint and halt settlement expansion and uproot outposts established in the occupied West Bank without Israeli government permission.”

Of course, the resolute refusal to face up to the hardest truths in the situation only serves the purposes of the worst element. This comparison almost sounds even-handed unless you happen to recall that Israel had already either fulfilled or made a sincere commitment to a majority of the requirements of the “road map” including ceding military and civil control of large portions of what was to become the Palestinian State, before the Palestinians froze the process with the latest intifada. Israel recognized the PA government, endorsed the “two state” solution and pulled out of Gaza altogether. Israel has made a practice of exhibiting remarkable (some say irresponsible) restraint in the face of a steady toll of death, injury and terror as an unrelenting stream of rockets and suicide bombers continue to be launched on Israel, and Abbas still can’t seem to bring himself to recognize the reality of Israel. It is, after all, a Jewish state.


Then again, the politics of access journalism means that she has to avoid saying anything that might damage her ability to get information from the government controlled and censored Palestinian News service. While Israel maintains a free media and allows any news organization equal access in Israel, Pleming knows that she would not have access to information or photos like this one with the story (note the credits: …picture released by the Palestinian Press Office (PPO). …, (REUTERS/Omar Rashidi/PPO/Handout)) if she didn’t represent the Palestinian view they way they want it. 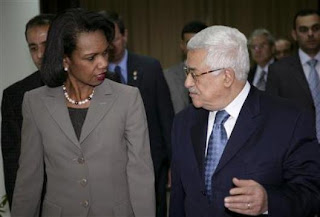 The Israelis, of course, will not punish her (or even make her or her employer the least bit uncomfortable) for her choice. She knows that and so does her boss at Reuters. It makes it easy to choose who to offend when the Palestinians even kidnap and kill reporters they consider their active supporters.


But let that go. That is Garden variety propaganda that can be seen for what it is and debated. It pales alongside this single sentence.

“Bush, who proposed the gathering, is searching for a better legacy than the invasion of Iraq and its chaotic aftermath.”

It may seem innocuous at first glance but this is important. This is press hubris and fictionalizing in its most naked form. It betrays the total lack of discipline that is endemic to a media that is so smug and self-important that it feels empowered to read thoughts into President Bush’s mind without even the pretense of attribution or qualification. Does the author say “some sources speculate…” or “It is thought…” or even “It is my theory that…”? No, She states this pure fabrication as if it were something that everyone knows and acknowledges.

The implication, of course is that President Bush thinks Iraq is a failure ad a lost cause and is trying to cover for “his mistake”. A fair presentation would at least acknowledge that President Bush has been able to point to remarkable progress in Iraq in the past few months and has never said that he feels his legacy to be sullied by Iraq. The implication is pure propaganda and has no place in an honest media.

Now set it alongside of the resolute refusal to see that the Palestinian refusal to accept Israel’s existence as a Jewish state means that they do not accept its right to exist. How does Sue Pleming penetrate so cynically and deeply into the mind of President Bush while remaining so absolutely blind, so intentionally ignorant about what the Palestinians are happy to tell her right to her face?

Obviously the face is unwilling to hear and understand.

I am at pains to expose this little sentence from a relatively insignificant article not because it is in any way earthshaking but, precisely because is so insignificant as to be both barely noticeable and powerfully subliminal in its effect. The smugness it represents, the Politically Correct instinct to make information that does not conform to the model of reality that must be defended are the most insidious and deadly sins of the media. The bland and inert Trojan Horse of an article in which they are wrapped only make them a more deadly.

Update:
We are accepting your opinions and nominations for a Lifetime Acheivement Awards post - There will be catagories and commentary. Either add a comment below with your thoughts or email [yaacovbenmoshe(at)comcast(dot)net] me.
Posted by Yaacov Ben Moshe at 12:58 PM

Yaacov, terrific Idea. I do a Dimwitted Dodo award periodically to some nitwit who either says or does something so egregiously outlandish that I just can't stay silent. Past recipients include Reid, Pelosi, Congress, The Senate and a few choice others.

Reminds me of the fun heyday of the beginning of the '94 Revolution when I used to clean Molly Ivans' (RIP) clock on a regular basis on our local editorial page. Y'see, ol Molly had a habit of presenting incorrect facts as opinions. (head bob) It was a heady time of freedom on our editorial page until the Dallas Morning News sent down a new manager and our great English editor was fired. I then received a letter on corporate paper informing me that I was "shrill" and "vindictive"and unless I straightened up my act, I was not welcome to write letters to the editor. Little ol me, a reclusive jackalope! This is such an exciting time because the alternative media doesn't allow the continued brainwashing effect that keeps the people off balanced and isolated thinking only they think something alternative. Those whitewashed walls are fixin' to crack in a big way, guys. Get your boots on and we're pushing through the rubble for the Promised Land. Whoop!

Second Draft is top work! Keep it up, gentlemen.

I love the post! You always have fun and creative perspectives...
I started a new blog that's connected to Jewish Pride. Come over and visit! Let me know what you think...

Great post as always. I found this one to be every bit as incisive as its forebears. Your ability to cut to the heart of the matter is downright surgical. I applaud you for being willing to run with this baton.