The Holtzbergs- Not "Ultra" and Not Missionaries 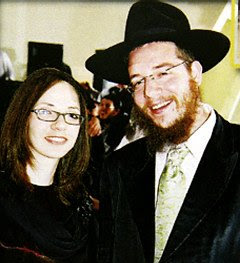 The Mainstream Media are already in the process of demeaning and dehumanizing the Jewish victims of the Mumbai massacre.

They are routinely called “Ultra-Orthodox” and I have already read of them them being referred to as “missionaries”. Shabbat is approaching so I don’t have time to frame a complete response and as much as it is not my usual way to write in haste, I need to tell you, these are lies.

I know the Lubavitchers very well. When we went to Ukraine to adopt our two boys six years ago we spent Passover with the Chabad in the Grand Synagogue of Kiev. The soviets had used it as a marionette theater. It was virtually destroyed until it was lovingly restored by the Chabad. There was no condescending pretense that our (Conservative American) brand of Judaism was less Jewish than the full Lubavitch observance. There was only the open handed, loving hearted Chabad wish to help us be the best Jews and human beings we could be. Their hospitality ad open-mindedness are the only "Ultra" thing about them.

We also visited Zhitomir, the city where my grandfather was born. There too, a tireless and dedicated Shaliach welcomed us and treated us with respect and love. He showed us how they have restored the Shul, are reclaiming the Jewish cemetery and are, daily, sending out hot meals over hundreds of miles of decayed and neglected country roads all over the Zitomir Guberna (a political region, like a state that I think is about the size of one of our eastern states) to the elderly, isolated Jews who have survived first the Tsar, then Hitler and then The Soviets.

Since we brought our boys home, they have attended the local Chabad Jewish day school here in Boston, Shaloh House, where they have learned to excel in Mathematics, Science, English, Tanakh, Mishna and Hebrew. They have also seen, first hand, the love and gratitude the whole families of Russian immigrants whose children they study and play with, feel for America and Western Civilization- in all its diverse and chaotic glory. They are not insular and isolated, they are accepting and open.

We have attend religious services there and I can tell you, although the ritual basis is very traditional and strict, they are open and helpful for those who can't keep up.

The Rabbi at Shaloh House, Dan Rodkin is, as were the Rabbis we met in Ukraine, a luminous soul with not a missionary thought in his mind nor a derogatory word in his vocabulary. I am very sure that Rabbi Holtzberg of Mumbai was out of that same mold.

The mainstream media is ignorant (only some are intentionally so) but, in a way, you can't blame them- because so many of our fellow American "Jews" foster the "Ultra" canard about these beautiful souls who in so many way epitomize what it means to be a not just a Jew, but a “fully human being”. May Rabbi Holtzberg and his wife, at least, be the beginning of an awakening.

Tell the world: “They were neither Missionaries nor ultra-Orthodox zealots they were, simple, devoted and loving people serving a very high purpose.”

They were murdered by zealots for purely political and bloody purposes. Here is a question for anyone who still denies that Caliphate Islamism is a problem: If they could do this to the Holtzbergs, if they could do this to all the other innocents people in Mumbai and Madrid and Beslan and New York and Jerusalem, how long will it be before they do it to you or someone you love? When will you stop trying to minimize and even excuse what they are doing by denigrating their victims?
Posted by Yaacov Ben Moshe at 1:03 PM

The main stream press is a giant bureaucracy with no feeling, soul, or intelligence. Their self loathing means normal belief and western value are a shameful and therefore suspect behavior. They make it so easy for blatant evil to be excused or explained away. Disgusting.
Thanks for explaining the truth.

Point being.. even if they *were* proselytizing, they didn't deserve to be murdered. Sadly, there will still be people in total denial about the goals of radical Islam, particularly within the Muslim community itself.

The jihadists are often portrayed as if they were an amoral force of nature that responds to provocation the way a gas leak might explode if you leave the valve open. So, if Jews or Christians are killed, it was because they were proselytizing or there is religious conflict when in fact pogroms have taken place. If someone makes a cartoon, it's the cartoonist's fault there are riots.
Is it the racism of low expectations?

Yaacov, thanks so much for bringing out the humanity of this beautiful couple, and the wonderful organization that they honored with their work.

I wd quibble a bit w/Nancy, since the lamestream media often DOES show feeling...For example when a gay youth is murdered, or a non-liberal white politician utters an anti-black slur, or when a Jewish "settler" points a gun at some Arab "youths," my, my, the outrage just POURS forth.

Yacov, you are absolutely right. I have never met kinder people in my life. Both of my children live in Brooklyn and found Chabad. Although they have chosen not to practice Judaism in the Orthodox fashion, they have found a place where are are always welcome. When my ex mother -in-law was hospitalized, my former sister-in law was distraught and confused with all the directives of the doctors. I suggeted she go to Chabad and they would help her make Jewish decisions about life and death. The rabbis were so helpful and inclusive they now have an other loyal admirer who continues to join them for holidays and services whenever possible.
My daughter summed it up best when she said, "All those people do is pray and do mitzvot ( good deeds). How could anyone kill them?" We now have unassailable proof that it is not " Israel" It is not " Zionism" It is nothing but barbarism and hate. Any Jew that still makes excuses for them is making excuses for the the death of civilization.

Thank you for your words of chizuk.

I am not Chabad; but I agree with you absolutely in your characterization of those dear people and their mission. The most important single mitzvah today, IMHO, is achdut -- unity -- among Jews.

May your words be part of a growing tsunami of words that sway our own people, and remind them to love each other, before being so quick to love our enemies.

This would be a great memorial to the murdered of Mumbai.

PSCHIEBER: Of course it's not just Jews or Zionism, they target all religions, which indeed proves their goals of global Islamisation. Sadly, most people are unwilling to acknowledge that.

Mother Teresa or today her organization could be characterized the same way. As a non Jew I find the speed at which Jewish victims get demonized breathtaking.

Islam is different than Christianity and Judaism.

Islam mandates hostility, violence, & intimidation to subjugate the other faiths to Islamic rule. This is supported by a 1400 year history of religious imperialism (conquering other cultures and nations). Islamic extremists apply intimidating violence literally to spread Islam's dominion.

I'm sure this contradicts (or supports) your anti-religionist worldview. Are you open-minded to learning the facts about it?

AndrewBostom.Org lays it out clearly today:

Contemporary validation of the central principle of jihad terrorism—rooted in the Koran—(for example, verses 8:12, 8:60, and 33:26)—i.e., to terrorize the enemies of the Muslims as a prelude to their conquest—has been provided in the mainstream Pakistani text on jihad warfare by Brigadier S.K. Malik, originally published in Lahore, in 1979.This text—widely studied in Islamic countries, and available in English, Urdu, and Arabic—has been recovered from the bodies of slain jihadists in Kashmir. Brigadier Malik emphasizes how instilling terror is essential to waging successful jihad campaigns:

"Terror struck into the hearts of the enemies is not only a means, it is the end in itself. Once a condition of terror into the opponent’s heart is obtained, hardly anything is left to be achieved. It is the point where the means and the end meet and merge. Terror is not a means of imposing decision upon the enemy (sic); it is the decision we wish to impose upon him…

“Jihad,” the Koranic concept of total strategy…[d]emands the preparation and application of total national power and military instrument is one of its elements. As a component of the total strategy, the military strategy aims at striking terror into the hearts of the enemy from the preparatory stage of war…Under ideal conditions, Jihad can produce a direct decision and force its will upon the enemy. Where that does not happen, military strategy should take over and aim at producing the decision from the military stage. Should that chance be missed, terror should be struck into the enemy during the actual fighting.

…the Book [Koran] does not visualize war being waged with “kid gloves.” It gives us a distinctive concept of total war. It wants both, the nation and the individual, to be at war “in toto,” that is, with all their spiritual, moral, and physical resources.

The Holy Koran lays the highest emphasis on the preparation for war. It wants us to prepare ourselves for war to the utmost. The test of utmost preparation lies in our capability to instill terror into the hearts of the enemies."

In my never-humble-opinion, when these people tortured a PREGNANT WOMAN to death - nothing more needs to be said about their own 'victimzation'. When you torture to death a PREGNANT WOMAN - you are committing an abomination!

By the way - I have never heard of a widespread Jewish Missionary program! Claiming they were missionaries is ludicrous - and a clue that all else they say is skewed by ignorance tempered with ideology...

Yet, I would like to make one other observation: IF these terrorists and their collaborators succeed in dividing us along religious lines, we will be conquered. I am an ignostic (not agnostic, ignostic) - but I think that Christians, Jews, Pagans, atheists, antitheists, ignostics, Hindus, Sikhs - and every other non-Islamist - we MUST ALL STAND TOGETHER!

If we get splintered along lines of our faith (or absence thereof) or the degree of our faith (calling them 'Ultra Orthodox' - so what if they were? I don't care if the victims worshipped polka-dotted penguins! These evil monsters tortured a PREGNANT WOMAN to death!), we will be picked off one at a time!

We must not be a collection of isolated groups - we must be a community, which uses our resources for common protection!