Iain Levine and HRW, In Deep and Still Digging 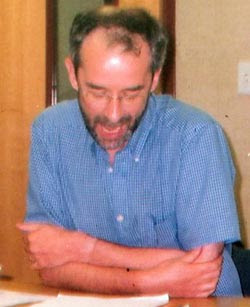 Apparently, no one ever told Iain Levine at Human Rights watch that when you are in a hole that you are having a hard time getting out of, the first thing you must do is to stop digging and he is doing his best to bring The Goldstone Report down the mine with him. It is the hallmark of poor salesmen and those who feel superior to other people that they do not know when to Shut Up. Levine, keen to discredit the storm of criticism of HRM that has been gathering force for years is running off at the mouth.

He is is trying to paint criticism of HRW as a new and sinister coordinated attack even though it has been building up for years as they have published report after prejudicial report damning Israel not just with sly, morally corrupt but superficially “even-handed” equivocation of Israeli self defense with Arabian genocidal aggression, but with the simply inaccurate and patently sloppy work of the now suspended Military “expert” Marc Garlasco. (You may remember that it was Garlasco who, back in 2006 stated publicly that it was an Israeli artillery shell that killed a family on an outing on a beach in Gaza. The accusation was picked up and touted by Israel’s detractors world wide before it was finally proven wrong- with nary a retraction or apology from HRW) .

Not content to let make arguments and try to prove his points, Levine has talked to The Guardian newspaper in England and is quoted as alleging that there is a coordinated attack being orchestrated by NGO Monitor, right wing bloggers and others, named and unnamed. He whines that those bad people are saying mean things “personally” about HRW. Here is an excerpt from the article”

Iain Levine, HRW's programme director, said that while the organisation had long attracted criticism, in recent months there had been significant attempts to intimidate and discredit it.

"I really hesitate to use words like conspiracy, but there is a feeling that there is an organised campaign, and we're seeing from different places what would appear to be co-ordinated attacks ... from some of the language and arguments used it would seem as if there has been discussion," he said."We are having to spend a lot of time repudiating the lies, the falsehoods, the misinformation."

He goes on to say that he believes that the purpose of the attacks is to distract attention from the Goldstone report:

Levine said he believes many of the attacks were aimed at distracting attention from the report of the UN investigator, Richard Goldstone, which was highly critical of Israel's killing of civilians in its three-week attack on Gaza that started last December. Goldstone is a former member of the HRW board and the group has strongly backed his report.

"We have been under enormous pressure and tremendous attacks, some of them very personal, as have been the attacks against Richard Goldstone with really vituperative language used to describe him: obsequious Jew, self-loathing Jew and all the rest of it," said Levine.

Poor thing, its odd that a guy who works for an organization that has made quite a good living out of trying to tie Israel’s hands behind her back while she is being attacked by other nations, professional terrorists, permanent refugees and proxy armies all of whom have publicly and unequivocally stated their intention to annihilate, destroy or “push her into the sea” might have a thicker skin than that. But, then, that is not the really pathetic thing about Levine.

Nor is the most pathetic thing about him that he says that because people are making similar arguments and using the same words about him and HRW that he thinks they all must be in cahoots in an organized way to attack them. Yes, it makes him sound like a kid who feels picked on by the math teachers in school because every year a different one tells him the “same thing” when he says that “one and one is three” but there is worse here.

No, the most pathetic thing is that he thinks that the fact that a number of people are alarmed enough about the damage that he and his fellow “holier than thou” protectors of the weak and defenseless at HRW have been doing to talk with each other and amass evidence and formulate logical arguments against them that that invalidates that evidence and those arguments.

Interestingly, Goldstone (don’t blame me, Levine brought him up!) has responded in much the same way, he has alleged that those who impugn his report have only attacked him personally and not made factual or logical arguments to the substance of the report. Apparently, neither Mr, Levine nor Judge Goldstone know about Google because if you google “Goldstone Report” you come up with lots of results with two of the first three being this and this, both compendiously factual, highly logical and almost strictly "not personal" in nature.

Yes, this is all quite pathetic in many ways but when Levine is quoted as saying, ."We are having to spend a lot of time repudiating the lies, the falsehoods, the misinformation." It is so very telling.

A word to Iain Levine: Think about it, Iain, your own words betray you. Facts and logic cannot be “repudiated” by honest men. To repudiate is to deny the validity or the reality of something. It may seem a small slip of the tongue but it reveals a truth. When you call what right-wing bloggers say about you, “lies, falsehoods and misinformation” it does not to prove that they are not true- Actually it is exactly what you call it- a repudiation.

“Repudiation” is empty. It is done by those who cannot refute or disprove. Much as you would like to repudiate what is being said about HRW and Goldstone, the desire to repudiate and the inability to refute is proof that a lot of it is accurate and deserved.

Posted by Yaacov Ben Moshe at 1:54 AM

I am a lifelong member of the Democratic Party, a former rock n' roll musician, a Christian, a father of two married to the same woman for 20 years. I am a fan of South Park, Radiohead, Arvo Part, Gustav Mahler, John Coltrane, and Batman. I spent my vacation in France, primarily so I could visit the home of Claude Monet. It is like Mecca to me, a pilgrimage I felt compelled to make.

All this being said, I also want to declare that I am part of the conspiracy against Goldstone and HRW.

Why? Because I think Jews deserve a homeland (so, I am a Zionist), and I believe the Palestinians have voted for, and are represented by governments which are monstrous.

Both of their Charters call for the destruction of Israel:

So, I am a member of the conspiracy against Goldstone and HRW, because I believe it is madness to ask Israel to sit down at the bargaining table with a "partner in Peace" whose first condition is Israel's death.

Get Levine a Bobcat, let him dig faster and harder!

AAAAHHH! let him keep digging by hand- I'd like to use the Bobcat to fill in after he's done!

Levine: "We are having to spend a lot of time repudiating the lies.."

Oh, the sweet poetic justice. Now he knows what Israelis must deal with every day.