The Biggest Freudian Slip in the History of Propaganda

On one of my regular visits to Seraphic Secret (one of the finest, most interesting blogs on the internet) I was reminded that Feb. 11th is Revolution Day in Iran. Robert posted this picture which I think should get more attention so I am borrowing it and putting up here as well. I left a comment at Seraphic Secret about it and will expand on it here... 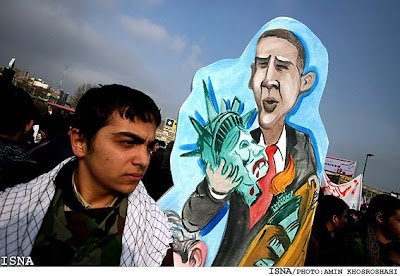 Correct me if I am mistaken, it looks to me that Obama has just beheaded Lady Liberty in that picture. If so, this must be in the running for the title of "The Biggest Freudian Slip in the History of Propaganda".
Think about it! What exactly are they saying here? Do they agree with many of our own American conservatives that President Obama's agenda is a deadly threat (intentional or not) to Liberty? Are they suddenly concerned for the preservation of American ideals? What is the meaning of an obviously verdi-copper colored statue bleeding red blood?
No, they care nothing for and know less about Liberty. The rage and pain in the Islamist soul renders them inchoate. There is nothing deeper here than hatred pure, mockery vile and fury unbounded. Poor un-manned Obama with an odd sort of orgasmic look on his face holding the desecrated female symbol of Liberty (name me one brave, important and powerful female symbol in all of Islam!) expresses their impotence more perfectly than any essay or analysis ever could. They are powerless to express the overwhelming rage. Their inability to see the real cause of the rage turns their every attempt at expression turgid and recursive.
This is why they call it Revolution Day. They celebrate their revolution with shows of irrational cascades of bloody symbolism and threats of death.
We call The Fourth of July Independence Day because something was born that day. The day that shooting started on started in our revolution, has been relegated to a second class state holiday in Massachusetts and we instead celebrate as a nation the publication of the document that proclaimed a new and unique way of organizing a government in these words:

"We hold these truths to be self-evident, that all men are created equal, that they are endowed by their Creator with certain unalienable rights, that among these are life, liberty and the pursuit of happiness. That to secure these rights, governments are instituted among men, deriving their just powers from the consent of the governed. "

Nothing was born on Revolution Day, it was just the latest in a series of bloody events that stretch back to the origin of the species, events that promise nothing but more and bigger of the same.
It was, after all my family's intimate encounter with a distant but deadly ripple from the utter insanity of Iran's streets that gave me my first inkling of the beast that is stalking us. But this picture is really a crystal window into what a squalid dead-end Iran and the dream of the Caliphate really is. These people haven't a clear thought in their heads. They are twisted and knotted so thoroughly around the Islamist armature of collectivism, misogyny and ignorance that they are truly "beside themselves" and they just HATE the neighborhood.
As for President Obama, believe what you will about his intentions and the bankruptcy of his agenda, his apparent acquiescence in the nuclear ambitions of these people put him in danger of becoming the chief enabler of the next holocaust- the most avoidable and horrifying one ever...
Posted by Yaacov Ben Moshe at 12:03 AM

I'll post the picture, too, on my blog later today. Hopefully it will spread.

Keep up your outstanding work. Blessings on you, Yaacov.

Thanks so much for the kind words and link. Superb analysis of the Islamic devolution. Have a Good Shabbos.