What Progressives Really Want- They Are All Grubers

Newt Gingrich in his excellent book  Understanding Trump has used Nassim Nicholas Taleb’s formulation of IYI (Intelligent Yet Idiot) to describe the class of Elitists, intellectuals and “experts” who typify the heavily credentialed but mostly incompetent policy charlatans, intellectual shamans and academic planners against whom the Tea Party, Brexit, and Trump/Make America Great Again movements have reacted. This is a very useful observation and a good starting point if you want to really understand who Progressives are and what they want.

In the most general sense, they want to rule us and decide everything for us. They want to put their policies into effect, as Jonathan Gruber so aptly put it, by writing their laws in such “tortured” (read: deceptive) ways that the “stupid American voters” would just let them do it. They think we need them because they are educated and knowledgable. They have studied and attained degrees and other credentials that supposedly entitle them to say whatever they feel is necessary to get control of us and our lives. If they really understood what they were doing, it would not be so so bad. All their education has endowed them with a great deal of knowledge about certain things and yet it has not given them (or allowed them to develop) a true understanding.

The great inventor and researcher, Charles F. Kettering once said, “Knowing is not understanding. There is a great difference between knowing and understanding: you can know a lot about something and not really understand it.” When Kettering was running the research group at GM, he made a point of retraining any PhD that the company hired. He would train him not to (as most PhDs do) proceed to try to fit the problem to what he already knew but to “,…encounter a problem without preconceptions and to let the problem teach him to both know and understand it. In this way the problem becomes its own solution. The only difference between a problem and a solution is that people understand the solution.” Kettering had a sign hung in the laboratory. It read simply, “Let the problem be the boss.”

But no, the Progressives want to rule us with knowledge not understanding. I don’t want to create the impression that I am picking only on Gruber, its just that he and his guileless truth-telling about his methods and aims give us the perfect example of how disastrous Progressiveism is as an approach to government. Mr Gruber has a complex and subtle knowledge of computer models and economic systems. About human nature and our economic behavior, however, he is as clueless and callous as a robot with Asperger’s Syndrome. Not only does he think we are stupid, he thinks that no matter how abjectly his designed programs fail, he can point to us as the problem- not his failure to understand. When, in 2016 Gruber was questioned on CNN about the incipient failure of the marketplaces he was ready to double down:
“There’s no sense in which it needs to be fixed,” Mr. Gruber said. When questioned further about why the insurance companies were pulling out of the exchanges he blames the companies for not being prepared for a “new kind of insurance market” and goes on to say, “The law is working as designed. However, it could work better. I think probably the most important thing experts would agree on is that we need a larger mandate penalty. We have individuals who are essentially free-riding on the system. They’re essentially waiting until they get sick and then getting health insurance.” Which is to say, that he wants to see people bullied with higher penalties to force them into the Obamacare plans. When someone like Gruber refers to “experts”, you can bet that he is talking about PhDs and knowledge mongers like himself.

One last example from Gruber comes from an interview he did with Maria Bartiromo- and this is the quintessential knowledge vs understanding argument. when at 7:30 of this interview Bartiromo tells Gruber that ten CEOs of corporations have told her that, from their personal experience, they know that Obamacare is hurting job growth because they have had to halt hiring in their companies, he replies that they and she are wrong and that Obamacare is not hurting job growth. He claims to have data and equations that disprove it. I am reminded of one of my favorite cartoons by S Harris: 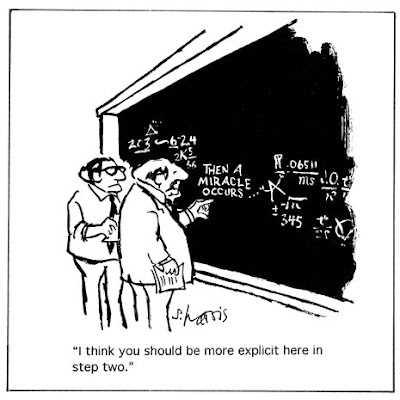 These people are not our “betters” they are smug, self-important fools whom we have allowed too much power in our nation and our lives. On top of it all Gruber has been exposed _ at least by the State of Vermont as a thief and a fraud for over billing and billing for work that he claimed had been done by a (probably) non-existent research assistant.

It is just this kind of bald-faced denial of true understanding- this shoveling of data points and “expert” opinion invalidate the real experience of real people- that has finally alerted so many people here and in Britain, at least, that Progressives don’t want to understand anything they just want to find ways to force us to do what they “know” we should be doing. How do they know that? Well, they are experts. What makes them experts? -Credentials earned in sterile, politically correct universities and experience producing essays, books and research that get approval from journalists, others like themselves and (most importantly) political “buy-in” by politicians who know more about how to get elected and re-elected than they understand about their constituents.

The funny thing is, for all that they call themselves Progressives, “progress” is also something they know but do not understand. If their idea of progress is equality, they do not stop at equality of opportunity. They want to to find ways to insure equality of outcome- and that means socialism at the least and communism at the worst. But then, for decades they have been making policy to foster the economic advancement of racial minorities and the black family has been gravely wounded and inequality of outcome is worse than it ever was.

In spite of all their failure, they want the world to work the way they “know” it “should” work and if it doesn’t they are prepared to bully you for “the common good.” and if bullying fails on the first try they will feel - as Gruber does about mandates- to move to coercion and beyond.

There is a Gruber in your future. The rise of this form of charlatanism has been stalled by President Trump but make no mistake, the Progressives are still coming on. They are not just Democrats the Bush administrations were full of them. Many of them are now in the ranks of the “Never Trumpers”. Emboldened over the thirty years since Reagan’s presidency there are too many academics, PhDs, consultants and authors without understanding who have been elevated with riches, position and praise.

By the way, I understand this myself because for the first few years after I got my Master’s Degree, I worked in the belly of that beast. I was a statistical programmer at, what was at the time, one of the premier social science and public policy research companies in the nation. That was a long time ago - Gruber was still in grade school. Since then, I have been in business for myself in honest, productive work but every time I read or hear what “The Establishment” wants to do or prevent, I recognize it as Progressivism and have come to think of it as The Voice of The Gruber.

They are not all without understanding but if they have never done any real work or had to really solve a problem, they should not be trusted to tell us how to live.  Know him or her for who they are, they are all “Grubers”. As is written in Isaiah 56:11 Yea, they are greedy dogs which can never have enough, and they are shepherds that cannot understand: they all look to their own way, every one for his gain, from his quarter.

Posted by Yaacov Ben Moshe at 9:32 AM

What a beautiful, insightful piece. This is why BOTB is required reading in my house!

BTW, why isn't Gruber busting rocks in a Vermont prison?

There is a reason why Halal ben Schachar, meaning "Arrogant Son of the Morning Star", characterized by the arrogant attitude that he thinks he's smarter than everyone else, thinking everyone else stupid, and desiring to lord over, control like slaves, and abuse mankind, is correctly known as Ha Satan, The Adversary, The Enemy. That dark and malevolent spirit relies chiefly on deception to achieve his unworthy goals, because if enough of us really knew and understood what he, his allies, and his children were up to, we would revolt, and rightly so.

As for power- and money-grubber Gruber's assertion that:
“There’s no sense in which it needs to be fixed,... The law is working as designed. However, it could work better. I think probably the most important thing experts would agree on is that we need a larger mandate penalty. We have individuals who are essentially free-riding on the system. They’re essentially waiting until they get sick and then getting health insurance.”

If Obamacare is really working as designed, then he is admitting that the real goal of government-run-and-controlled health care was indeed to destroy the market for health care, destroy its accessibility and availability, and make callous government bureaucrats into gatekeepers who decide WHETHER someone who needs medical treatment actually gets any. Those filthy vermin seek to control us like slaves, hoping that we'll kiss their asses in exchange for being allowed medical treatment for a small extension of our temporal lives, rather than kicking their asses and giving them the richly deserved beatdown for so much as the attempt to control us. When Yahowah cleanses the last of them from the face of the Earth on the definitive fulfillment of Yom Kippurym, good riddance!!!