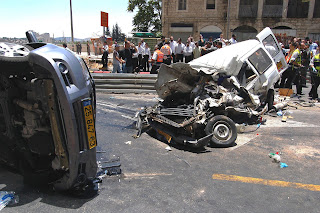 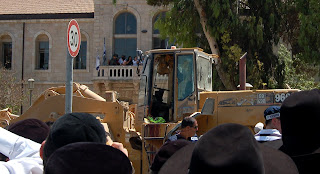 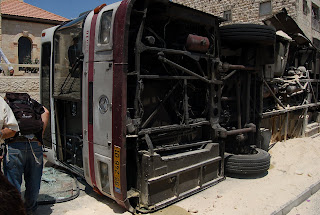 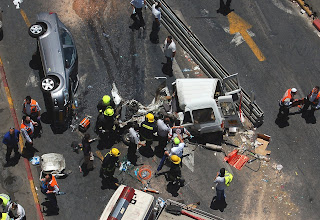 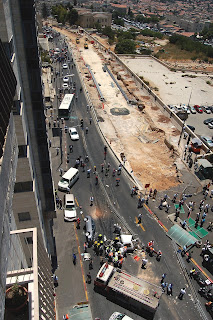 My last post points out how closely the behavior of the terrorists resembles that of abusive domestic partners. Even as I was putting the post up they were busy proving my point. Richard Landes has forwarded me these incredible pictures, taken by his daughter Noa Landes in the immediate aftermath of today's so called "bulldozer attack" in Jerusalem.

With every sly attempt, as today’s, to kill more jews without breaching the “ceasefire” so obviously that we have to admit it- it becomes more apparent that they only want to kill. Then, if the Israeli government has the spine to take measures to prevent murderers from East Jerusalem from getting jobs where they can get equipment like this to kill innocent people with, the helpful advice givers will say, "You are oppressing them and depriving them of their livelihood". Just like the fools who condemn a battered woman by telling her to go back to her husband rather than "tear apart the family" or "deprive the children of their father."

Some Father. Some Livelihood.

Even as the pusillanimous Israeli government began to try to put off any action by floating the theory that it was "an isolated act, the Palestinian Leader, Abbas, in the most cynical of ironic deceptions, called the attack an attempt to derail the peace process. So much deception and denial- you need a bulldozer to clear it away.

We have to stop the madness and suffering now. If you can see that it is fruitless to dialog and negotiate with a domestic abuser why can't you see that the Jihadis will never stop finding ways to do this.

For the good of Western Civilization and of the Palestinian people who suffer because of their ruthless leaders, defeat them!
Posted by Yaacov Ben Moshe at 5:02 PM

"I will not fear the tens of thousands drawn up against me on every side."

*
and, to absolutely no one's surprise, the freaks are all lining up to take credit...

"The attack has been claimed by three Palestinian militant groups, including one which has an affiliation with the Lebanese militant group Hezbollah, although such claims are not unusual in such cases."

allah must be so proud.

What a brave soldier of Allah, killing unsuspecting women and grandfathers. That's a true hero right there.

It's an apt comparison.

The comparison is eerily spot on:

The terrorist murderer was once involved with a Jewish woman.

<"I can't believe he did what he did; he was a good, caring person," the Jewish ex-girlfriend of Hossam Dawyyat said Thursday, a day after the bulldozer driver's killing spree in downtown Jerusalem left three people dead.>

This good, caring person was convicted in court for assaulting this same woman and threating her with murder. He served a prison term on this.

You see the battered woman syndrom in action...

There was the story I heard about the woman in that van who had her small child. Though she was trapped and could not escape she was able to hand the child out of the window thus saving the child's life. The driver of the front end loader then continued to drive over the van, killing her. May be true or not.

Too long has Israel put up with the abuse. The muslim only loves death. Reunite them with what they love. Please.