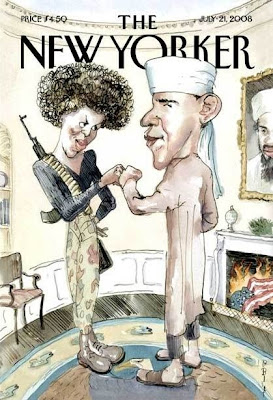 After eight years of “BusHitler, chimpy mcflightsuit, drinky mcdumbass, george w. bush, shrub, mission accomplished, bush moron, potus dubya, four flushing, asshole george bush, republican chimperor and so many other humorous/damning epithets that go largely ignored by President Bush, his administration and the greater conservative community (if there were really any similarity between him and Hitler, those critics would all be dead)it may strike some as ironic that the New Yorker cover has attracted such a vigorous and angry response from the left.

There has been much dreary and indignant rhetoric from both sides on this subject and, having been absorbed by the CNN/WEDEMAN analysis I have been out of the action. I would, however, point out that anyone who had read my post The Emergence of the Agélaste Left could have predicted the indignant outcry from the supporters of The Candidate of Change. The quote that I used in that post from Milan Kundera’s The Joke  will suffice:

“No great movement designed to change the world can bear to be laughed at or belittled. Mockery is a rust that corrodes all it touches.”

The corollary, of course, is that Bush ignores the BusHitler slur because it has no tinge of reality and The Obamaites get hysterical over the New Yorker cover because there is an element of truth to it.
It is, after all, a question of free speech- who will tolerate it and who cannot tolerate it.
UPDATE: This from a friend in Israel who has read enough Kundera:

Kundera? As in, the unbearable lightness of Obama's resume?

A good article, and good points.
New emperors don't like people making fun of the new clothes, do they? (laughing)
They are especially sensitive when not yet annointed, and not yet fitted.

I think it is a clue to the asymmetry of the information war between the American left and right that the editor of the New Yorker was on Charlie Rose earnestly trying to explain his mag's satire. I felt like I was watching a stage play of superb nuance taking the Micky out of political correctness or perhaps a Maoist self criticism session. Did an journo of similar gravitas bring a critical examination to the chimp depictions etc. mentioned above of our president? Was the NY Times forced to undergo public humiliation by a leading journalist over its publishing the 'General Betrayus' ad at too friendly rates?

The uncanny thing about the Obama cover is that from a man from Mars perspective it looks serious. The quality of the drawing is too grave and lacks a sense of fun that marks really good satire. To see what I mean, put 'National Review' at the top of the cover instead of 'New Yorker' and for me the drawing suddenly seems serious. So asymmetry apart I think a curious element of the brouhaha is that the cartoon itself fails as satire.

"Bush ignores the BusHitler slur because it has no tinge of reality and The Obamaites get hysterical over the New Yorker cover because there is an element of truth to it."

And there you have it.

Rereading your list of things George W Bush has been called my Jacksonian ear informs me that neither Dubya nor Shrub are insults. I was calling Bush 'Shrub' back when he was Governor of Texas and I was hanging out in Louisiana. Most folks in those parts referred to him that way. It just means 'Little Bush' and is a Southern way to distinguish him from his daddy. Dubya also serves to keep from mixing him up with 'Aich Dubya'.

As for the term 'Dubya' itself, it's just the correct pronunciation of the twenty fourth letter of the alphabet in Texas. It may be used derisively or ironically by Yankees but in Texas it is a term of endearment. Same goes for calling Dubya's predecessor Bubba. I guess it all depends on what your definition of 'Bubba' is, but all it ever meant to me was that the man is who he is and you have take him as he comes. Whenever they start with the 'Bush Hitler' or 'Chimpy MacHalliburton,' I find myself fondly referring to him over the next few days as Dubya as if he was a favorite cousin who was being picked on.