These lies are killers. Correction isn't enough!  Only Early Warning and Aggressive Prevention can:
Save Israel’s Honor.
Save Lives!
If you knew that there was a significant opportunity that a very moderate investment would save hundreds and possibly thousands of Jewish lives over the next four years would you consider taking part in such an investment? Then help us fight Pallywood, the now well-documented practice of Palestinians faking news that accuses Israel of atrocities, and the mainstream media’s notorious gullibility in circulating this “news.”

The tidal wave of bloody violence that followed the al Durah hoax, Pallywood’s single most destructive triumph, resulted not only in unbridled violence in Israel, The West Bank (left) and Gaza, but served as background or justification for a global tsunami of 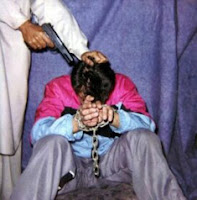 anti-Zionism and anti-Semitism, and such world events as 9/11, Bali, London, Madrid and the beheading of Daniel Pearl (right).

Similarly, the premature cessation of the Lebanon War because of the Kfar Qana hoax has assured the death of the hostages, the buildup of Hizbollah forces and rocket supplies on northern Israel’s border, and strengthened Iran’s global reach. More broadly, allegations of massacres and brutality like the Jenin Hoax have at once crippled Israeli troops (who must consult lawyers before any major initiative), and incensed a Palestinian and Arab world enraged by the images of ruthless destruction. Rockets fired from civilian areas continue to rain down on Sderot and Ashkelon too, protected by Pallywood stunts like staged blackouts (right) and wanton assaults on Palestinian 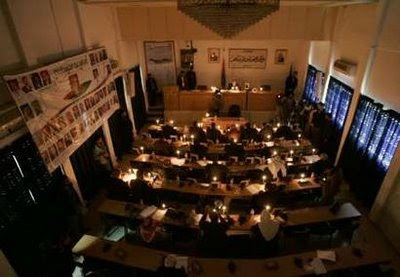 civilians. As a result, consumers of Western news have a radically distorted impression of the conflict. The nation with the most exceptional record of concern for enemy civilians appears as an oppressive war-monger, and the culture which targets civilians in the most depraved manner – suicide bombing – comes across as “freedom fighters.”

The producers of Pallywood are, you can be sure, working overtime on their next Hoax. It is only a matter of time before there is a new “Intifada,” a new blood bath. The difference is that today, we have it in our power to prevent Pallywood Hoaxes from gaining credence and producing lies and hatred with the same success as they once enjoyed.

With a new president in the White House who has been drawn to the likes of Robert Malley, Zbigniew Brzezinski, Richard Lugar and Samantha Power, who thinks that Israel would be crazy not to accept the Saudi “Peace Plan,” and with an uncertain political situation in Israel it is more important than ever that we can produce the ultimate weapon in Israel’s hasbara arsenal -- clear, accurate undistorted and timely information. 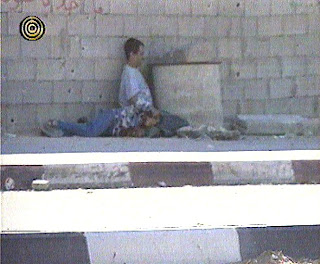 Second Draft has, from the start, taken a leadership role and has unexcelled experience in this crucial work. Our work on al Durah, Gaza Beach and Kfar Qana has broken new ground in exposing some of its fundamental mechanisms -- both technical and psychological --

and given us an analytical framework with which to combat Pallywood on its own terms. We have come to understand that the key to a successful defense is the ability to identify the threat immediately, serve notice on the media that there is a problem before the story becomes too widespread and to inform the public completely and credibly.

An informed public and a cautious and honest media are our only guarantee that tomorrow will not bring dangers that surprise and, even, overwhelm us. Democratic culture, with its magnificent commitment to self-criticism via a free press, faces a wide range of foes in the 21st century, and cannot afford to be blinded by our own well-intentioned but manipulated and manipulative news media. The mission of Second Draft is to create an educated public, to make that public aware of the distorting effect of media bias and provide that public with the resources to resist and rebuke the mainstream news media when appropriate.

Our most critical project is to pull together our Immediate Response Team of internationally recognized forensic experts who will be on stand-by for the next “made for media atrocity” that experience has shown will accompany the inevitable confrontation between Israel and her enemies in Hamas, Hezbollah and Syria. And the Western media is still too eager by half to regurgitate them as news. If you will help us position ourselves to oppose Pallywood swiftly and effectively, you will be striking a blow against lies and manipulations and, in fact, not only saving lives, but contributing to the possibility of peace. For as long as the Palestinians can successfully pull off Pallywood and blame Israel for the violence, they have no reason to keep their commitments.

We need your donations, now. to put these important safeguards in place. We know that times are difficult for many of you and there are a lot of ways that you can help other than direct donations. Introductions to friends by way of gatherings and speaking engagements can be even more helpful than cash. If you could help us put together a small gathering or event with some other concerned people who could help us, it would be a great help to us and, I can assure you, a real benefit to Israel and all Jews. Please, help us to be ready to stop the lies before they get started this time.

Our new Web Site (pictured on the right) 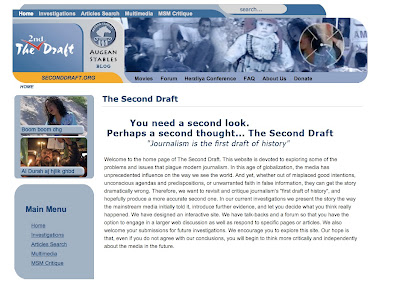 is ready to go. We have a world-class international team of experts ready to devote their skills to whatever “they” can throw at us. We just need your help to put it all into action! You can donate online at our current site address below, send donations by mail to the address below or contact us at this email or the phone number below for other options.

Thank you for your consideration!

Posted by Yaacov Ben Moshe at 1:04 AM

I am impressed with what you are doing, but the real problem is getting it out past the MSM into the minds of the ordinary people who don't even realize that there is a story that they are not being told.